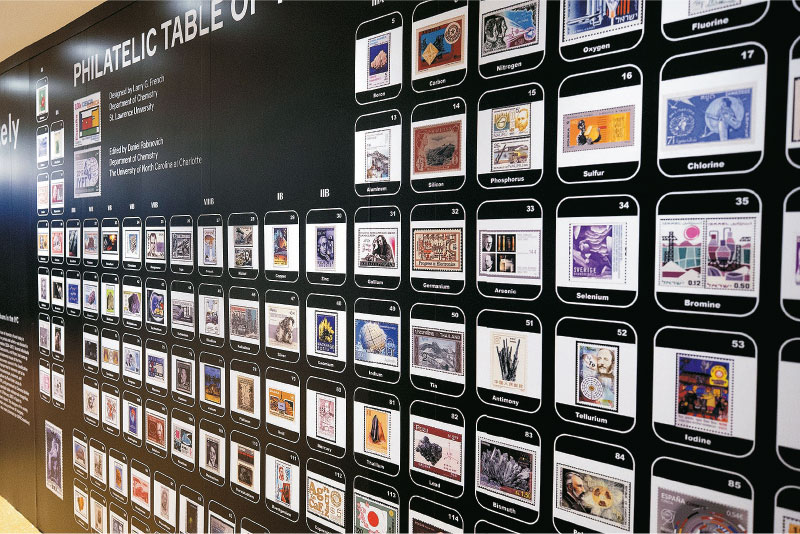 The International Year of the Periodic Table of Chemical Elements (IYPT 2019), was a special year for the chemical community, our country, and the entire world.

On December 20, 2017, the 74th Plenary Meeting of the 72nd session of the UN General Assembly adopted a resolution on science, technology, and innovation for development. Article 31 of the resolution proclaimed that “The International Year of the Periodic Table of Chemical Elements will begin on January 1, 2019”.

This resolution was made possible due to the tremendous work of the International Union of Pure and Applied Chemistry (IUPAC), the Russian Ministry of Foreign Affairs, the Russian Commission for UNESCO, the Mendeleev Russian Chemical Society, and many Russian and foreign scientists.

The IYPT 2019 opening ceremony was held at the UNESCO headquarters in Paris on January 29, 2019. Audrey Azoulay, Director General of UNESCO, greeted the audience. The opening ceremony was sponsored by the Russian company PhosAgro and featured a presentation of the UNESCO educational initiative “1001 Inventions: Journeys from Alchemy to Chemistry”. The initiative is aimed at schoolchildren and combines educational materials with practical scientific experiments to provide a better understanding of chemistry and its applications. It was later launched in a number of countries, including China, Germany, Russia, and the UK.

An important feature of IYPT 2019 was the celebration of the International Day of Women and Girls in Science on February 11, 2019. The University of Murcia hosted the international symposium, “Making Their Table: Women and the Periodic Table of Elements”. Female chemists played an important role in the discovery of new chemical elements. One need only mention Marie Curie, winner of the 1903 and 1911 Nobel Prizes for her discovery of radium and polonium; Ida Noddack, who discovered rhenium (Re); and Marguerite Perey, discoverer of francium, among the many other remarkable women in the history of chemistry.

Over 90 countries celebrated IYPT 2019 around the world.

A special symposium titled “150 years of the Periodic Table” was organized as part of the 47th IUPAC World Chemistry Congress in Paris. The event was accompanied by the 51st International Chemical Olympiad, featuring teams from 80 countries. The Russian team won four gold medals.

Thematic exhibitions for the 150th anniversary of the Periodic Table took place in London, Beijing, Tokyo, several Indian states, and many other countries. In October, Rome hosted the conference “Symphony of the Elements”, organized by the Italian Federation of Physicists and Chemists. The conference concluded with a performance of the ballet, “Dance of the Elements”. Musical works dedicated to the Periodic Table premiered in China, Israel, and Japan. Commemorative stamps were issued in many countries, including Spain, Kyrgyzstan, Algeria, Moldova, and Russia. The European Parliament held a special hearing in which the European Chemical Society presented a Periodic Table of “disappearing” elements. Problems related to the sustainable management of rare and trace elements aroused particular interest among policymakers, and specific proposals were developed around this important issue. Dar es Salaam in Tanzania served as the venue for the International Summer School on Green Chemistry as part of the IYPT.

In the Russian Federation, the National Organizing Committee headed by Dmitry Medvedev sponsored events dedicated to the outstanding scientist Dmitri Mendeleev and his scientific heritage. The XXI Mendeleev Congress on General and Applied Chemistry, a key event for the scientific community, witnessed its largest ever gathering in St. Petersburg. Almost 4,000 participants from 60 countries took part in the XXI Congress. Among them were two Nobel Prize winners, five IUPAC presidents, presidents of chemical and astrophysical associations, directors of leading global scientific institutes and chemical universities, heads of scientific foundations and industrial companies, historians, and politicians. Achieving yet another record, Congress attendees completed a total of 5,366 reports. Seven international English-speaking symposiums were held for the first time at the XXI Congress, also gathering a record number of participants. Congressional round tables addressed key issues regarding the interaction between science and business, multilateral international cooperation and the promotion of chemistry.

The XII All-Russia Science Festival NAUKA 0+ also broke several records. From October 11-13, an unprecedented audience of 950,000 people gathered in Moscow to attend Russia’s main science and education forum. The festival included over 2,000 events organized at more than 100 venues across the city. These events were coordinated by 350 organizations, including leading universities, scientific centers, research institutes, technological enterprises, museums, and schools in Moscow. Although chemistry and the Periodic Table were the focus of the festival, every scientific field was represented, from particle physics to sociology. To honor the 150th anniversary of the Russian scientist’s colossal discovery, the festival organizers presented Russia’s largest Mendeleev’s Table. The 67-meter-long and 9-meter-high image occupies the entire facade of the Palace of Pioneers at Vorobyovy Gory.

On May 18, 34,000 people took part in the 2nd All-Russia Chemical Test. Each test question revealed the important role that chemistry plays in the lives of individuals and society, as well as the chemical nature of the surrounding world.

The IYPT 2019 closing ceremony was held on December 5 in Tokyo. The audience enthusiastically greeted Academy of Science member, Yuri Oganesyan, who had given his name to the 118th and most recent chemical element on the Periodic Table (Oganeson). Chairman of the Executive Committee of IYPT Japan, Kohei Tamao, noted in his speech that the closing ceremony allows participants to look back at the events that took place to celebrate the anniversary of the Periodic Table across the globe. These events honored the work of scientists and engineers who have made significant contributions to the discovery and development of the Periodic Table, as well as the work of those who are still studying new elements for future contributions to our contemporary world.