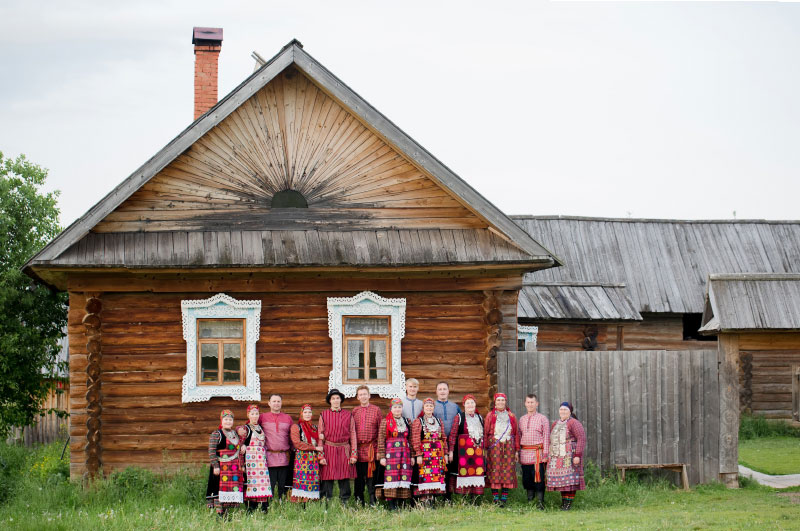 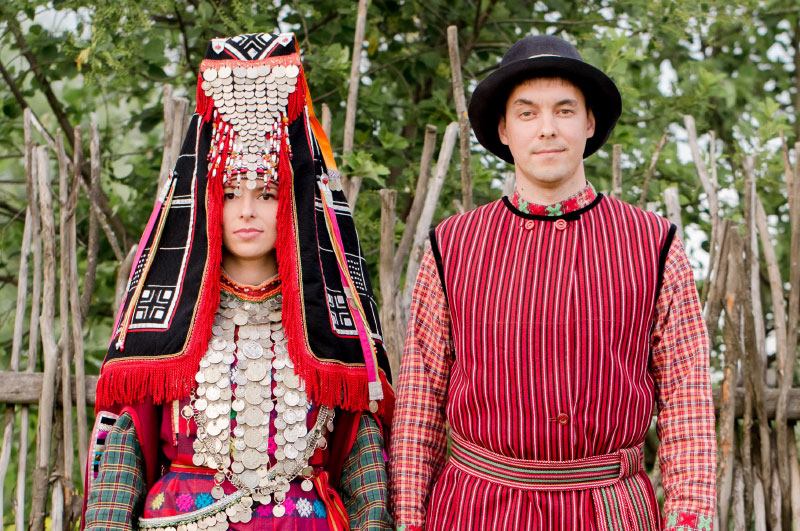 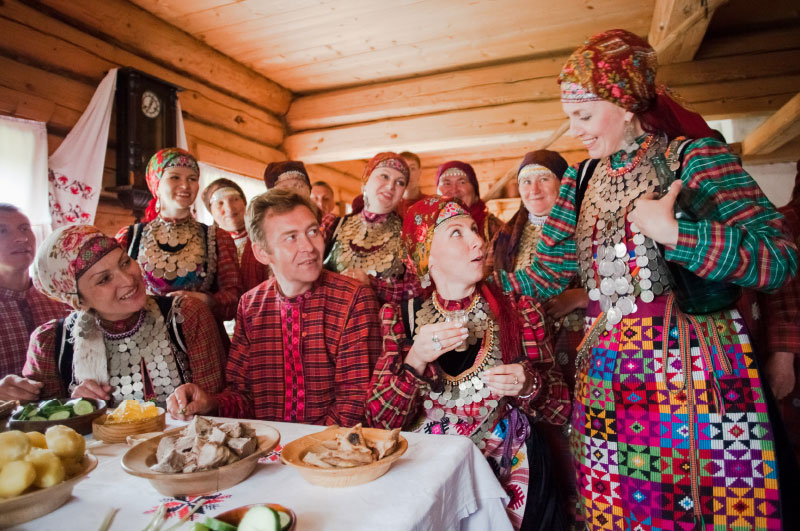 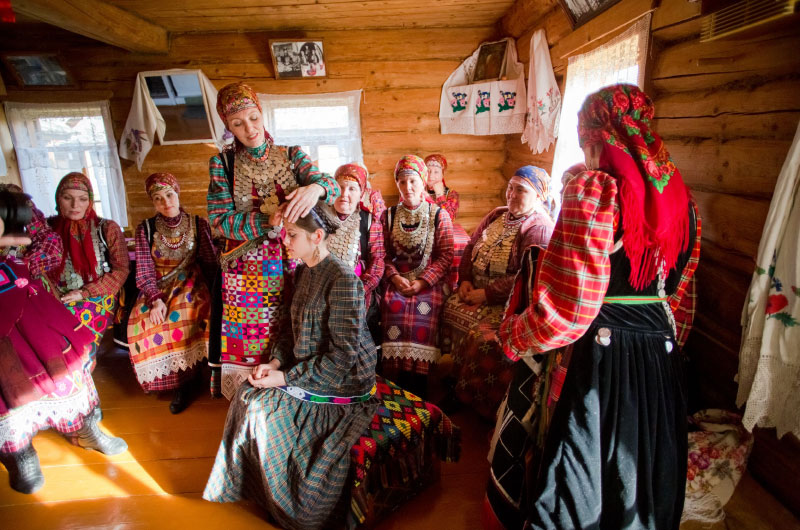 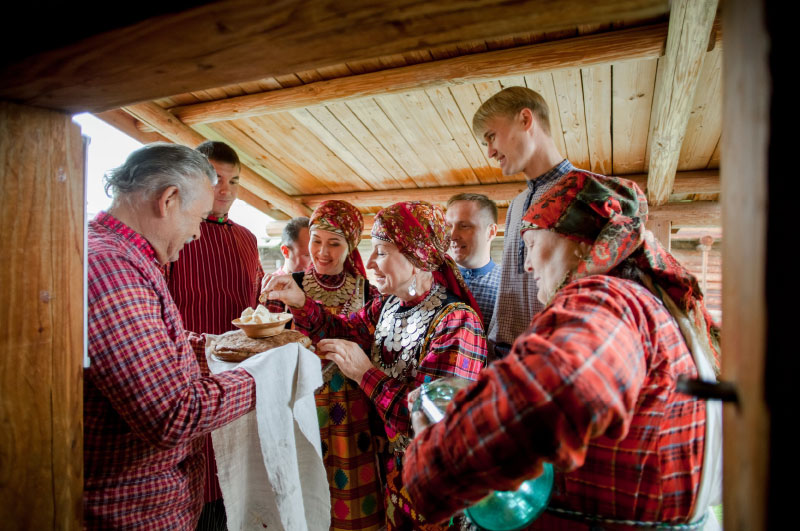 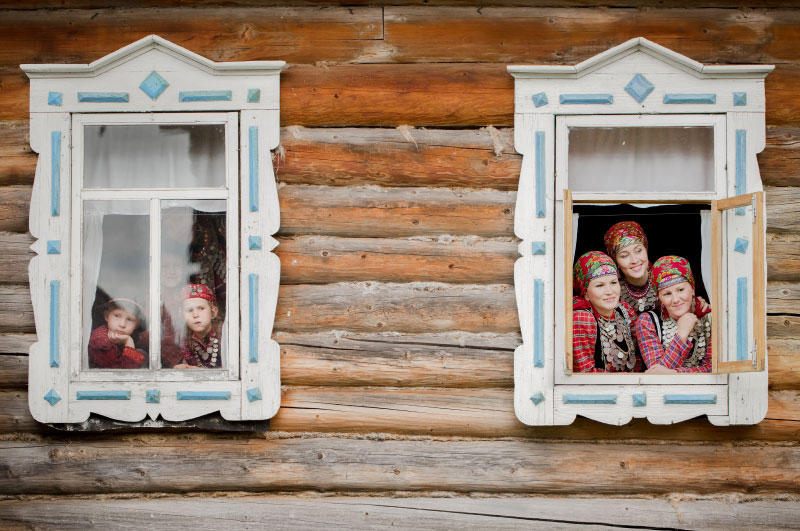 The wedding is one of the main events in one’s life, and wedding ceremonies are to ensure a prosperous and happy life of the spouses.

Wedding is the most complicated of all the traditional Udmurt rites. It includes matchmaking, agreement, feasts in the houses of bride and groom, post-wedding rituals.

In the bride the primarily interests were good health, hard work, dexterity, attitude to home duties. If relatives of the groom liked her, they went to woo.

It took several times to woo, as it was improper to give consent to the first bridegroom. The more times they came to woo, the more was the dignity of the girl.

After the matchmaking in the bride’s house, there was an agreement between representatives of two families: the groom’s parents discussed the dates of the wedding, the number of guests, the dowry, and the ransom for the bride was paid. When they came to a final agreement, the mother of the bride would put butter and a loaf of bread on the table as a symbol of well-being and happiness. The father of the groom would stick a silver coin into the butter, and the girl was considered engaged.

The parents of bride and groom invited relatives to take part in the wedding with the phrase “grease the shoes with oil, feed the horses!” Being invited to a wedding was considered a great honor. Young people were looking forward to their first wedding invitations. The father gave a silver or a gold coin for the first participation in the wedding, for maintaining a good reputation of parents, for the ability to account for the trip. Unmarried young men needed to care of their reputation, because they were looked upon as prospective grooms.

People put on festive clothes for the wedding. The national Udmurt costume is a symbol of hard work, neatness, a talisman and protection from evil spirits. Primary colors are black, red and white.

White is a symbol of purity, holiness, eternity.

When the wedding procession came up to the bride’s house, the gates were closed in front of it. In order to enter, the groom had to pay a ransom. Participants tried to climb over the fence and to open the gates from the inside, but this was not allowed to be done by the bride’s relatives. Meanwhile, the bridesmaids could steal horses and a carriage (in the winter — sleds) to ride around the village.

When all the invited guests gathered, the chief steward of the wedding and the leading singer brought in arms were introduced to them. In most cases the singer was the bride’s godfather. The steward was the most respected and honored guest, always seated first at the head of the table and only on a pillow gifted by bride’s parents.

At each Udmurt wedding, proverbs, sayings, prayer spells, well-wishes were spoken, and wedding songs were sung. The bride did not take part in the wedding feast until prior her leaving.

Prior to bride leaving the family home, they tried to soften her with a song and to bring her to tears, as it was thought, the more tears she shed at the wedding, the less tears would be later in life.

When everything was ready for departure, the bride was hidden and the door was locked, and the key was hung on the neck of a goose which was released outside. The groom could get the bride by paying a ransom, catching the goose and removing the key off of it.

When the carriage had left, they drew a line across the street, symbolically indicating that the bride from that time on is forbidden to return to her parents’ house.

The celebration in the groom’s house, where the wedding procession came to with the bride’s relatives, could be held the following day, or even in a week or in several months.

A rite of dressing the bride in a traditional wedding dress was performed: put on a hat — a turban, frontlet and ishon with a kerchief, which meant the end of girlhood. Udmurt turban is a symbol of a woman. After that, the girl could no longer show herself in public with her head uncovered and barefoot.

A variety of towels were shown during the dowry demonstration. Some of them the bride prepared to give as gifts on the first day of the wedding. At one end of the towel, the bride had embroidered an ornament of her family, and at the other end of groom’s family. Guests tied them to the waist so that an embroidered pattern was visible. These towels were called «passport». They symbolized the union of the groom’s and the bride’s families.

It was common to hold symbolic trials for the bride and groom. The bride demonstrated the ability to cook, and the groom’s test was in agility. At one of the tests, the bride and groom were led to the river for water. They showed where water should be brought into the house from. The bride had to bring water to the house without splashing it. Meanwhile her dressed-up relatives tried to impede her in every possible way: they wanted to knock over the buckets and tried to splatter the groom. Therefore, she had to collect water several times in buckets.

During the wedding festivities, dressed up guests put on performances and various ceremonies. Live chicken was lowered into the chimney, and the guests watched how the chicken would behave after it would jump out of it. If it would run under stove, it meant that the bride would stay in the house for a long time, and if to door, she would soon leave this house.

When the time came to say goodbye to the bride, they always sang songs. The bride sat on a bench and everyone who said goodbye took her hand and expressed their sorrow that she had to remain in a strange house, and again brought her to tears.

The wedding cycle took from a few months to a year.

There were also post-wedding ceremonies aimed at further consolidating the relations between two families.

The original wedding of Udmurts in its entirety is described in the “Traditional Udmurt Wedding” book from the “Weddings of the Peoples of Russia” series. In this publication, each fragment of the rites is illustrated in detail by modern and archival photographs, with a description based on the materials of ethnographic researchers in three languages (in Russian, Udmurt and English). Scientific editor of the book is Alexey Zagrebin, Doctor of History, professor of the Russian Academy of Sciences, Honored Scientist of the Udmurt Republic, member of the Committee on Education and Science of the State Duma. According to experts, this book is one of the best examples representing the culture of the people, because it contains information about wedding ceremonies, as well as a description of traditional life, clothes, kitchens, homes, etc.