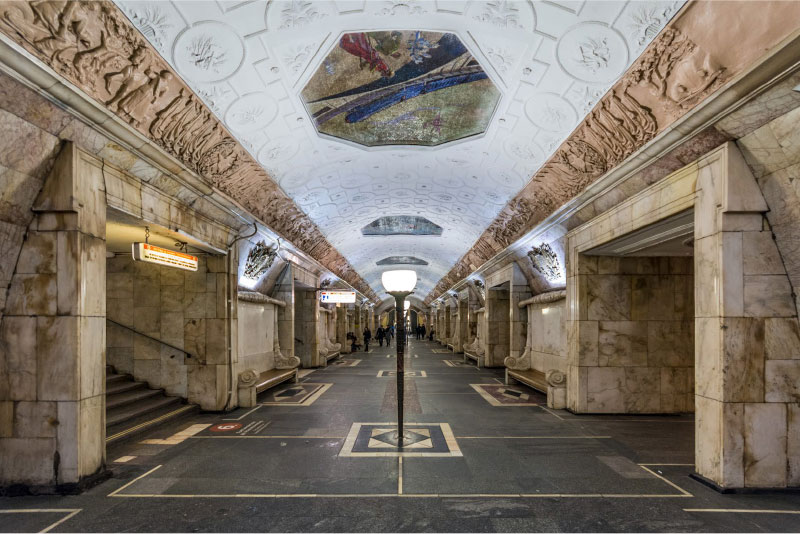 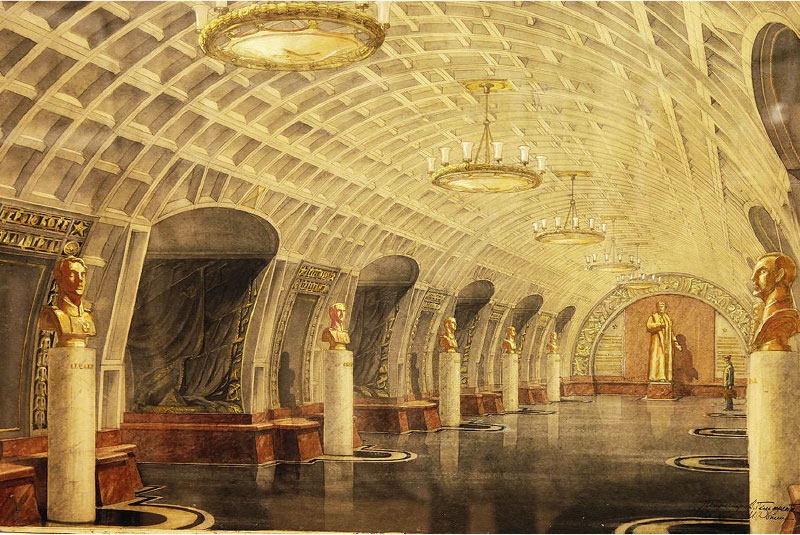 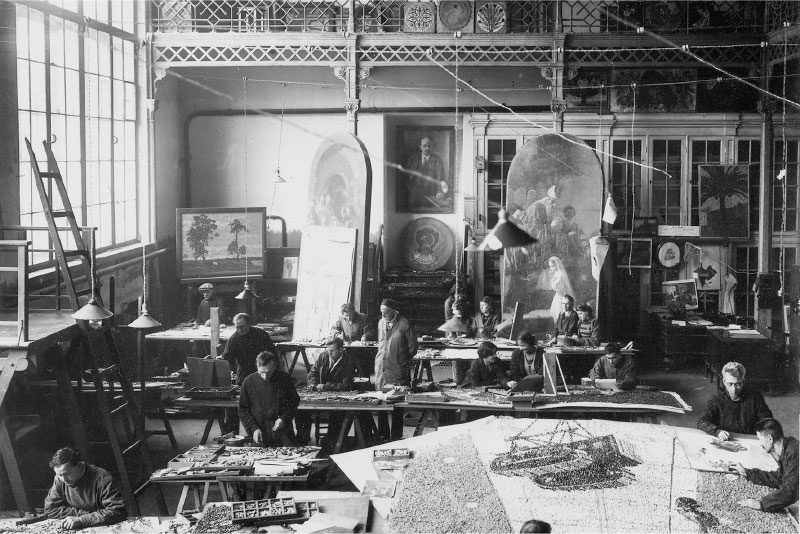 The Novokuznetskaya station on the Zamoskvoretskaya line is not only one of the most beautiful Metro stops in Moscow. Just like a mirror, its history reflects the uneasy path traveled by our country during the war and post-war years.

There are several important dates in the history of the building of the Novokuznetskaya. The first one is the summer of 1932 when the British experts were invited to Moscow to provide advice on the project of the Metro construction. One of the legends says that it was they who designed the station. However, it was not the case, as the station is the creation of the best architects, sculptors, and artists of the USSR.
Initially, the far-seeing plan included five diameters with two intersecting radiuses each: Myasnitsko-Ussachevsky, Tagansko-Tverskoy, Arbatsko-Pokrovsky, Dzerzhinsko-Zamoskvoretsky, and Rogozh-Krasnopresnensky. Then, it was decided to add the Kaluzhsko-Timiryazevsky diameter. However, the British experts proposed to substitute overlapping Zamoskvoretsko-Dzerzhinsky and Tagansky diameters with Zamoskvoretsko-Tverskoy and Dzerzhinsko-Tagansky ones. This proposal was accepted, and the Zamoskvoretskaya line was designed in its present form in 1934. The same year, the Church of St. Paraskeva Pyatnitsa was demolished, and the outer vestibule of the Novokuznetskaya station was built on its site. By the way, the station’s name appeared not at once: first, it was planned to call it Klimentovsky Pereulok, later — Novo-Kuznetskaya, and only in the course of time was it given its present name.
The next landmark date in the station’s history is July 10, 1937. On that day, the final project execution plan, which included the Novokuznetskaya, was approved. The construction commenced in 1938.

According to the plans, the building of the station was not supposed to take more than three years. But the war unleashed, and it seemed that all the country’s forces were focused on the front. Nevertheless, the construction of the Metro continued. The Novokuznetskaya is not only an example of the creativity of outstanding architects, sculptors, and artists, but also a monument of the Soviet people’s labor feat during the war.
Referring to the Novokuznetskaya station, we often use the words “for the first time”. Indeed, for the first time in the history of the Russian Metro, the outer vestibule was built in the form of a rotunda. Among the authors of this unique project, there are several prominent architects. The first of them is Vladimir Gelfreich, an alumnus of the Higher Art School of the Imperial Academy of Arts. By the time the work on the Novokuznetskaya station began, Gelfreich was already well-known. His younger assistants were Igor Rozhin, who later became the People’s Architect of the USSR, and Lyubov Shagurina. Their joint efforts resulted in the creation of a rotunda with a dome and columns set around its perimeter. Everyone in Moscow came to see this masterpiece.
Above the vestibule passages, there are medallions with bas-reliefs depicting works of art, science, and technology crafted by the famous sculptor Georgy Motovilov, a student of the academician of the Imperial Academy of Arts Sergei Volnukhin and a celebrated sculptor Sergei Konenkov. George Motovilov received a gold medal at the Paris World Fair in 1937. His bas-reliefs are genuine works of art.
The authors of the station project were then young architects — spouses Ivan Taranov and Nadezhda Bykova. It was their idea to use pylons and cross passages in the construction of the metro for the first time. Decorated with massive portals, the passages make the station look solemn. In the niches at the base of the pylons, there are marble benches, resembling sofas in shape. According to another legend, they were taken from the Cathedral of Christ the Savior, which was demolished by that time. Actually, it was Taranov and Bykova’s mentor, the outstanding Soviet architect Ivan Zholtovsky who masterminded the creation of special benches for this station. Here is how Nadezhda Bykova recalled working with him, “He was an artist with an exquisite taste. He could easily agree with the opinion of a young colleague and could suggest valuable ideas tactfully, without imposing them. This way, the Novokuznetskaya’s marble benches with volutes appeared at his suggestion. He supported our intention to install a series of floor lamps along the сentral line of the underground hall and approved the drawing of the dome, which was inspired by the Roman tomb of Valerii.”

Glory to the heroes

The Novokuznetskya station was built mainly during the war. It was opened in November 1943. Therefore, it is not surprising that the military theme and the work of Soviet people in the rear are prevailing in its design. Thus, each marble bench in the Central Hall is decorated with metal shields that say, “Glory to the heroic defenders of Leningrad, Sevastopol, Odesa, and Stalingrad”. On the side halls, there are similar shields with bas-reliefs of famous military commanders: Aleksander Nevsky, Dmitry Donskoy, Kuzma Minin, Dmitry Pozharsky, Alexander Suvorov, and Mikhail Kutuzov. Between the pylons and the vault in the Central Hall, there is a frieze depicting warriors going into battle. It was created by notorious soviet sculptors Nikolai Tomsky и Saul Rabinovich.
However, the key elements of the setting that make the Novokuznetskya Metro station so unique are the mosaics of great beauty. The masterpieces, such as the Gardeners, the Steelworkers, the Builders, the Machine-builders, the Miners, the Aviators, the Skiers, and the Parade of the physical education teachers were created by Vladimir Frolov on the basis of Aleksandr Deyneka’s sketches.

It is important to mention the deed of Vladimir Frolov, a hereditary mosaic painter. He was born in Saint Petersburg, where he spent all his life. The Frolov family owned the world’s largest collection of smalt. In 1895, the Frolov’s private workshop of decorative mosaics, being the first one in Russia, won a tender for creating mosaics for the Church of the Savior on Blood in Saint Petersburg. Vladimir Frolov was a world-famous artist who himself painted the mosaics for Alexander Nevsky Cathedral in Warsaw, Saint Alexis Church in Leipzig, and Theodorovsky Cathedral in Tsarskoye Selo.
After the revolution, Frolov’s workshop was nationalized, but the master continued to work there. When he received an order for mosaics for the Novokuznetskaya Metro station, he was a very old man with poor sight. Leningrad was under the siege. There was no heating or lighting in the workshop. The glass broken during the bombing was replaced with the plywood. Hungry, cold, with a dim light from a kerosene lamp, Frolov managed to finish the mosaics in 1942. They were transported to Moscow through the Road of Life, which connected besieged Leningrad with the rest of the Soviet Union through Lake Ladoga, and the Novokuznetskaya was decorated with them. Unfortunately, Vladimir Alexandrovich never got to know that: the unique artist died of hunger and was buried in a mass grave.

The Novokuznetskaya Metro station has been evolving over time. In the 60s, the images of Stalin that were present in its decor were replaced by those of Lenin. In 1970, the Central Hall of the Novokuznetskaya was extended by building a transition to the Kaluzhsko-Rizhskaya line at the southern end of the station. Today, the southern hall of the Tretyakovskaya station is located there. The new passages with pylons differ from the old ones: they are simpler and more concise in decor. In the early 80s, the design work on the Kalininskaya Metro line started. It required building a new hall on the Novokuznetskaya station for the movement of trains in the southern direction on the Kaluzhsko-Rizhskaya line in 1986. The stairs and bridges over the platform served as a transition to it. In 1996, one more passage connecting the Novokuznetskaya with the old halls of the Tretyakovskaya station was created. Its walls were revetted by light marble and illuminated by daylight through the tubes.
Originally, the Frolov’s mosaics were illuminated by the floor lamps installed along the station hall’s center. Their bases and tubes were made of black and red limestone. But the lighting was rather dim, so in 2005 it was decided to modernize it. On January 27, 2013, which marked another anniversary of the lifting of the siege of Leningrad, a memorial plaque was unveiled at the Novokuznetskaya station in memory of the great master of mosaics. The inscription on it reads, “this station preserves mosaics made in the besieged Leningrad in the mosaic workshop of the All-Russian Academy of Arts under the supervision of Professor Vladimir Frolov.”
At present, the Novokuznetskaya is one of the key stations of the Moscow Metro. Up to 45,000 passengers pass through it every day.