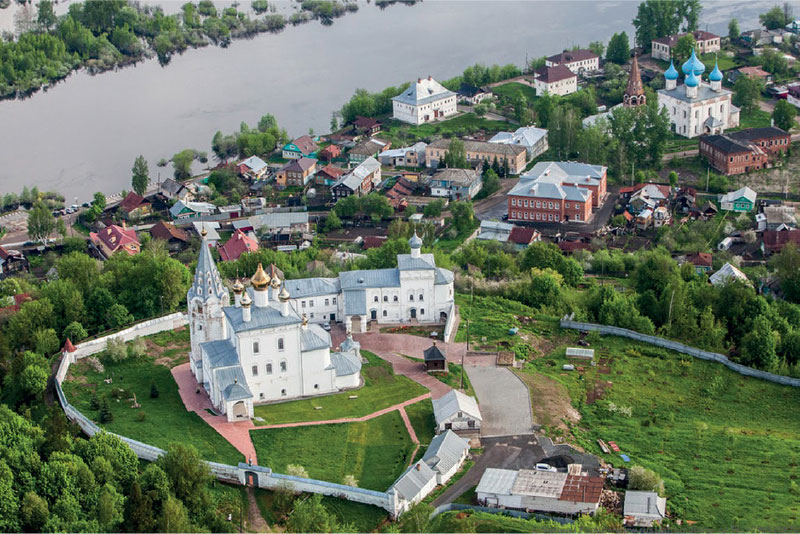 More than eight centuries of history, unique buildings combining Russian wooden architecture and European Art Nouveau, tradition and modernity — all of these are the features of Gorokhovets, a town situated on the right bank of the Klyazma river in the Vladimir region.

Was there a pea?

Although Gorokhovets shares its name with the Russian word for pea (gorokh) and its coat of arms features stalks of growing pea plants, the town’s name actually has nothing to do with the little green vegetable.

Archaeological finds indicate that the first settlement on the site of present-day Gorokhovets sprang up in the 6th century. At that time the place was inhabited by Finno-Ugric tribes. According to one version, the town’s name originated from the word “horrohoves” which means “a village slumbering under the snow” in their language. In the 10th—11th centuries, Slavic peoples started to settle on the right bank of the Klyazma. For that reason, the majority of historians find the Slavic theory of how and why the town was given its name the most reasonable. But here again, the opinions differ. Some believe that the first settlement on the territory of today’s Gorokhovets was located on the so-called Yarilina mountain. Ancient Slavs believed that deity of summer and harvest Jarilo spent winters in his grave inside it. In this case, the name of the town means “a grave mountain”, which sounds like “gora-khovets” in Russian. However, a version that is probably closer to the truth is that Gorokhovets is a portmanteau of the words “mountain” and “hide” (in old Russian — “gora” and “khovatsya”). Therefore, we are talking about a city hidden under a mountain.

However, the town itself was founded much later. Before that, the Grand Prince Andrey Bogolyubsky, son of the Grand Prince of Kyiv Yuri Dolgoruky, ordered to build there a fortress, the so-called “detinets”(citadel), in 1168. It was a strategic point during the military campaigns against Volga Bulgaria. As was tradition, people began to settle inside the fortress walls, and trade and craft settlements appeared. In the Laurentian Chronicle, a unique monument of ancient Russian history and culture dating from 1239, Gorokhovets is described as “the town of Holy Mother” which was burned by the Mongol-Tatars.

Gorokhovets was repeatedly subjected to Mongol-Tatar raids. Nikolai Karamzin wrote in the History of the Russian state, “having conquered the areas in the vicinity of the Don and Volga, Batu Khan’s mobs returned to the borders of Russia; they captured Mordovian lands, Murom, and Gorokhovets.”

Cincture of the Virgin Mary

In the Middle ages, Gorokhovets was razed to the ground and rebuilt again. Grand Prince Vasily I built the Russian defensive lines called the Cincture of the Virgin Mary. On their eastern border stood the town Gorokhovets. The development of any medieval city implied the construction of churches and monasteries. In 1352, the Suzdal’s Saviour Monastery of Saint Euthymius built the Basil of Caesarea’s mansion was built nearby Gorokhovets.

In the 15th century, Gorokhovets became part of the Nizhny Novgorod district. A growing and developing town was attractive to foreign invaders. In 1539, Gorokhovets was looted and destroyed by the Kazan Tatars, but the locals quickly rebuilt and fortified it. As early as in 1545, the town managed to repel another attack.

There is a very beautiful legend about Gorokhovets. According to it, the Tatar army laid siege to the town at night and prepared to storm it in the morning. But when the sun came up, the enemies had a vision. They saw an image of a giant Russian warrior on the mountain and fled in fear. Gorokhovets was saved, and the mountain subsequently became known as Puzhalova (Frightful).

The second wife of the Russian Tsar Ivan the Terrible was Circassian princess Maria Temryukovna. Her brother Mikhail Temryukovich became one of the Tsar’s companions and received from him Gorokhovets, which soon became the chief town of the district.

The beginning of the 17th century was a challenging period in the town’s history. It was captured by Poles and burned by Circassians. But Gorokhovets withstood and continued to grow and develop.

The fortress turns into the city

Since the middle of the 17th century, Gorokhovets had been losing its importance as a defensive fortress. It started to develop as a full-fledged city. In the 60s, a unique monument of Russian architecture, the Holy Trinity-Nikolsky monastery, was erected here. The Golden domes of the Trinity Cathedral, the main building of the monastery, as well as the Church of the Intercession of the Holy Virgin remain major landmarks of Gorokhovets today and attract a huge number of tourists. In 1993, the Nikolsky monastery began to function again.

Another architectural and historical treasure of the town is the ensemble of the Sretensky Convent. Today it is located in the heart of Gorokhovets. It was also founded in the 17th century. At first, all of the monastic buildings were wooden, but in 1689 the stone Sretensky Cathedral was erected at the monastery compound. Later, the stone Church of Saint Sergius of Radonezh was built there as well.

The Znamensky Monastery, which was built in the 17th century is one more example of the cultural heritage of the peoples of Russia that is protected by the state. It was built at the expense of the Moscow boyar Peter Lopukhin who recruited archers from Gorokhovets. Originally, the monastery was wooden. As early as in 1670, a stone Church of the Sign of the Holy Virgin was built on its territory. In 1733, a bell tower and the Church of Saint John the Theologian were added to it. Later, the monastery got a stone fence with towers that was destroyed in the 1960s.

But Gorokhovets, which became part of the Vladimir province in 1778, was famous not only for its monasteries and churches. It was home to many talented masters and craftsmen: boilermakers involved in the construction of ships and railway bridges all across Russia, stonemasons, dyers, carpenters, etc.

Local carpenters and woodcarvers were called “yakushi”, as most of them came from the Yakushevo village located near Gorokhovets. The “Explanatory Dictionary of the Living Great Russian language”, compiled in the middle of the 19th century by Vladimir Dal, defines “yakushi” as “workers specializing in chiseling and woodcarvers who create wooden decorations for houses and ships.” They mastered not only the art of traditional Russian flat carving but also that of the figured one.

The Kanonnikovs and the Ershovs, the Sapozhnikovs and the Shorins, the Shiryaevs and the Shumilins — all these merchant names were widely known all over Russia. Successful entrepreneurs and generous benefactors, the Gorokhovets’ merchants had done a lot for their hometown. Thanks to them, Gorokhovets became one of the 12 fastest growing cities in Russia in the 19th century. For example, the owner of several shops and factories Mikhail Sapozhnikov spent about 13 thousand rubles on charity only between 1882 and 1887. He built and fully funded the so-called “Sapozhnikov’s poorhouse”. The water supply system appeared in Gorokhovets also through the efforts of Mikhail Sapozhnikov. The City’s Public Bank was opened at his own expense. Women’s gymnasium and parish men’s school, — all these and some other educational institutions cost the merchant three annual budgets of the entire Gorokhovets! Mikhail Sapozhnikov purchased and restored the monument of Russian architecture of the 18th century — a three-story Palace of the Shiryaev merchant family. Today it houses the Gorokhovets Historical and Architectural Museum. And after the death of the merchant Sapozhnikov in 1913, the city received 100 thousand rubles in accordance with the will that he left. The interest of this capital was to be spent on education and enlightenment. 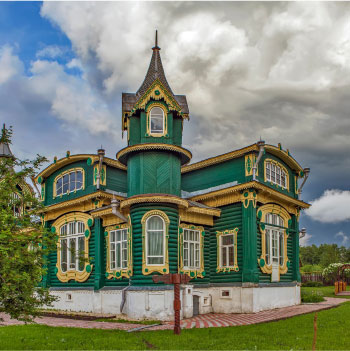 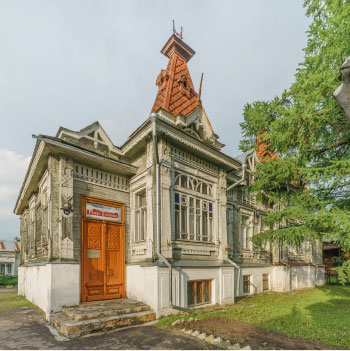 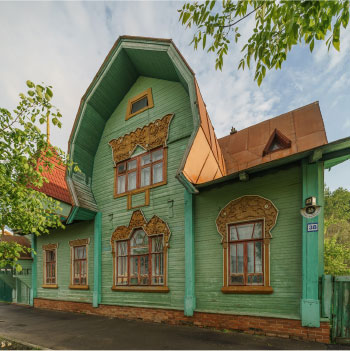 And, of course, it is important to mention the name of Ivan Shorin. He came from the family of Old Believer peasants but created the largest industry in the country — the Gorokhovets shipbuilding plant. He bought a metalwork manufacturing factory from another entrepreneur, Semyon Semyonychev, and then expanded the production and changed the line of business, focusing on shipbuilding. In 1907, the modernized plant received an order to construct the Marfa Posadnitsa tanker barge in accordance with the project of the famous Russian engineer Vladimir Shukhov, who designed the Shabolovskaya tower in Moscow. In the future, almost all large barges for the Volga-Caspian basin were built at the Shorin’s plant. In Soviet times, the Gorokhovets shipyard was considered the largest in the country. What is more, Ivan Shorin’s house remains one of the best architectural and historical monuments of the city to date. The towers made of logs that are bent into rings and the curved stain glass windows are particularly fascinating. Just imagine how skillful the carpenters who created it were! And the house as a whole is an amazing combination of Russian wood carving traditions and European Art Nouveau.

Overall, the architecture of Gorokhovets and the history of its merchants are intertwined. The house in the traditional Russian style with two tent-roofed towers and lugged architraves is the legacy of the merchant Kuchin. The town got the luxurious white-stone chambers from the Oparin merchant family. A mansion with a mezzanine, a roof over the porch, and platbands with mermaids, lions, birds, and plants carved on them — this masterpiece was built by the chairman of the Zemstvo board Fedor Prishletsov.

After the revolution of 1917, the architectural monuments of ancient Gorokhovets were threatened with destruction. Fortunately, the Russian Commission for the Preservation of Artistic Treasures headed by Igor Grabar payed a visit to the town in August 1919. A talented artist and eminent art historian, Grabar was astonished by the number and excellent state of conservation of monuments in Gorokhovets. Many of them were placed under state protection. In 1970, the entire town was added to the list of Russian Historic Cities with the architectural heritage of great value. Soon the town became part of the Golden Ring of Russia tourist route, the project on the restoration of the key monuments was developed and implemented, and the Museum and Tourist Center was established.

In 2017, the ancient town of Gorokhovets was included in the UNESCO World Heritage Tentative List as the site reflecting “the impact of an important interchange of human values, over a span of time or within a cultural area of the world, on developments in architecture or technology, monumental arts, town-planning or landscape design” and representing “an outstanding example of a type of building, architectural or technological ensemble or landscape which illustrates a significant stage in human history.”

Today, there are 108 cultural heritage sites in Gorokhovts, 24 of which are of federal importance. In 2017, this town with a population of about 13 thousand people was visited by 60 thousand tourists. In 2018, this figure increased nearly 2.5 times and continues to rise every year.