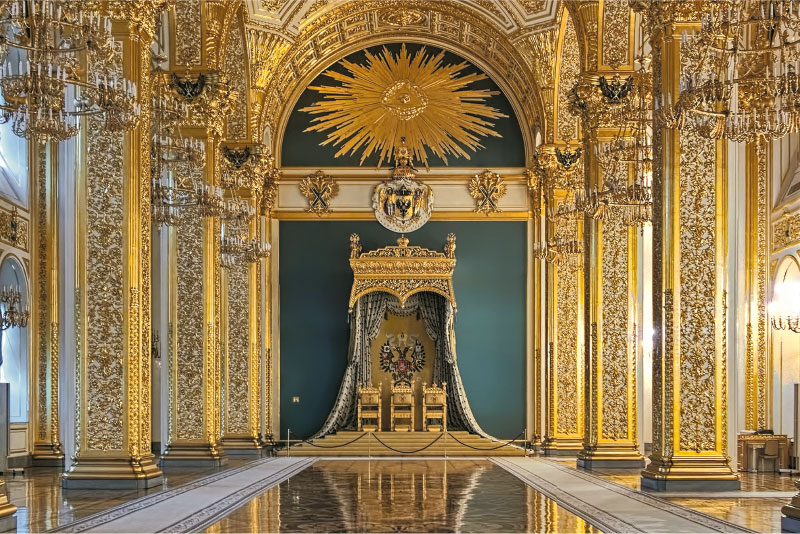 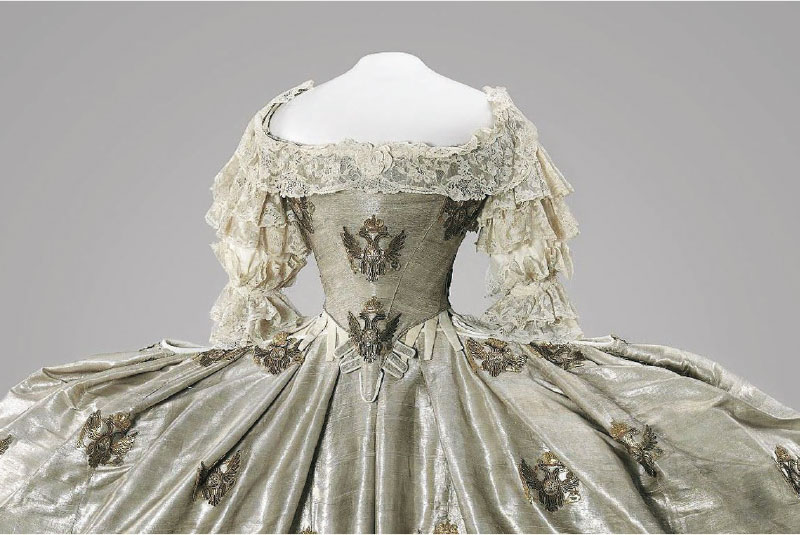 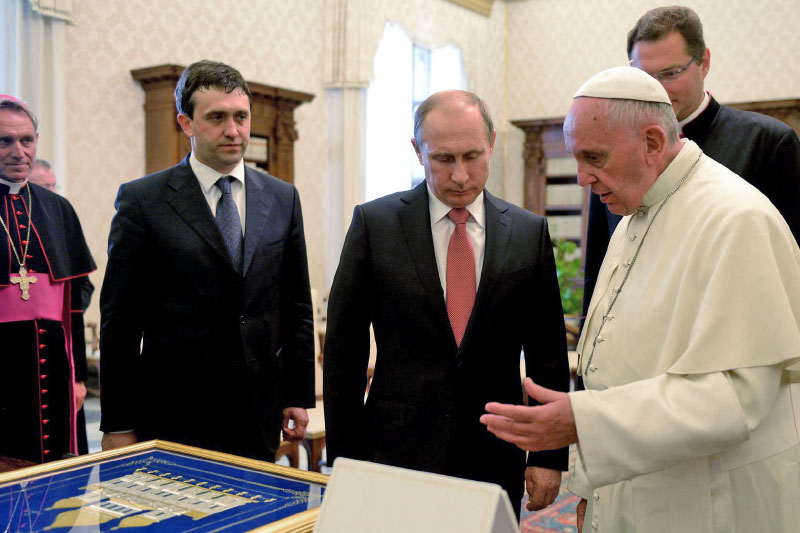 In the Saint Andrew Hall of the Grand Kremlin Palace in Moscow, you can see curtains and royal thrones embroidered with gold. In the Apostolic Palace of Pope Francis, there is an embroidered panel depicting the Cathedral of Christ the Savior in Moscow. Centuries and countries are united by the unique gold embroidery art of craftswomen from the Russian town of Torzhok.

Continuing our stories about the rich and intangible heritage of Russia, we offer you a virtual trip to one of the oldest Russian towns — Torzhok. Founded in the late 10th and early 11th centuries on the banks of the Tvertsa River in the Tver region, for nearly a thousand years it has been famous for its unique architecture and crafts. The wooden Old Ascension Church, Borisoglebsky Monastery, and the Imperial Track Palace… there are about 400 historical and cultural monuments in a small town of Torzhok. It is no wonder that the town has the status of a historical settlement of federal significance.

The traditional art craft of Torzhok, gold embroidery, is no less interesting than the town’s architecture. A fragment of ceremonial wear, embroidered with gold and silver threads, was found as a result of archaeological excavations in 2010. Scientists date the item to 1238. This date can be considered the birth year of the tradition of Torzhok gold embroidery. Back in the 9th century, gold-embroidered pieces of leather served as a type of currency in Russia. Princess Olga and the sister of Boris Godunov Irina both knew how to skillfully embroider with gold, so the craftswomen of Torzhok had someone to learn from.

Hats, clothes, shoes, and church and home decoration nicely and skillfully embroidered with gold threads by the talented craftswomen of Torzhok were always in high demand. Each thread contained from 5 to 8% gold and could truly be considered gold not just because of its composition but also thanks to the income that gold embroidery brought at the time. That the gold thread was attached to the surface of the fabric with transverse silk threads instead of being sewn through is a distinctive feature of this embroidery. A thick pad of cardboard or birch was used for the embroidery of bright, colorful and original patterns as well as interesting ornaments.

The initial creators of this unique embroidery were nuns of the Torzhok nunneries. They embroidered on velvet, morocco leather, and cloth with gold thread that had been purchased from the Byzantine Empire. The growing demand for skillfully embroidered items led to the gradual replacing of gold thread with thin, twisted gold wire. Following this modification to their technique the craftswomen of Torzhok began to call their sewing “golden”. In the middle of the 17th century, a morocco leather market was opened in Torzhok. Shoes, made of morocco leather and embroidered with golden thread, were extremely popular among the Russian nobility and abroad thanks to their great quality and beauty. The most common patterns for Torzhok embroidery were floral patterns that would intertwine with each other creating vivid, splendid images of plants. The most typical pattern was a rose branch, decorated with curls, flourishes, and embellishments. Among the other popular pattern was the motif of a bird or a pair of birds in the centre surrounded with colorful flowers. During the same time, the nuns began to master embroidery on other materials such as velvet and satin. And in 1644, a face cover for the relics of Saint Ephraim, a unique monument of Russian art, was crafted in the Borisoglebsky monastery.

In the autumn of 1826, the brilliant Russian poet Alexander Pushkin often described as the Sun of Russian poetry, visited Torzhok. The wife of his friend, Prince Pyotr Vyazemsky, Vera Fedorovna asked Pushkin to send her a belt embroidered with gold. “I am in a great hurry, Princess, to send you these belts,” wrote Pushkin in his letter to Princess Vyazemsky. A few days later, the poet wrote to Prince Pyotr Vyazemsky himself asking: “Did the Princess receive my belts and my letter that was sent to her from Torzhok?” Later Pushkin added: “Ah! Tell the Princess that she will outshine and charm everyone in Moscow as soon as she dons my belts”.

Three dozen craftswomen from Torzhok were called to Saint Petersburg for the forthcoming coronation of the Russian Emperor Alexander II in 1855. There they embroidered uniforms and dresses for the members of the royal family and numerous nobles in the court. Many years later it was once again the craftswomen of Torzhok who embroidered the coronation mantle for Emperor Alexander III and the mantle and dress of his wife Empress Maria Feodorovna in 1888. Today, these relics are kept in the Armory Chamber in Moscow and in the State Hermitage Museum in Saint Petersburg.

During the period of Torzhok’s fame in Russia, the craftswomen and their products were well known in other countries as well. Their morocco leather, gold embroidered shoes were highly popular in European countries. The crafts of Torzhok gold seamstresses were awarded a medal at the World Exhibition in London in 1862.

By the end of the 19th century the art of embroidery, which was passed down from generation to generation for years, had been mostly forgotten. But thanks to one man the Torzhok gold embroidery exists to this day. This was the hereditary nobleman, a member of the institution of local government called the Zemsky Council of Torzhok, Dmitri Romanov. He was a widely educated man and a passionate patriot of his native land. In 1894 he created and led the handicraft department at the local government Zemstvo, which was developing folk crafts. In 1899 the great efforts of Romanov made possible the opening of gold-embroidery workshops, where experienced embroiderers taught young girls the art of gold embroidery.

“Dmitri Romanov was a good man, who lived with us here, in Torzhok. His estate was quite small and was located nearby. He received his education in Paris, you know… Romanov worked at the local government Zemstvo, and his way of thinking and reasoning was very bold for his time … He was very interested in gold embroidery. Dmitry Romanov would often give us good advice: “You, he says, do not forget about the Torzhok craft techniques and always learn from nature because nature is very generous for both its patterns and colors”… He also suggested: “We must create a handicraft department at Zemstvo. Seamstresses can bring their products there so that no one can abuse their labor. This was done in 1894 …” — recalls Claudia Krotova, the Torzhok gold-sewing craftswoman, many years later.

The incredible efforts of Dmitri Romanov were not in vain. At the World Exhibition in Paris in 1900 and in Turin in 1911, the exquisite products of craftswomen of Torzhok received gold medals. In 1911, Dmitri Romanov started the Torzhok Gold Sewing Museum with exhibits that he had personally collected. He passed away in 1916, and, tragically, the cause to which he had devoted his life and the tradition of Torzhok gold embroidery were again on the verge of extinction. The period in the history of gold embroidery following the death of Romanov is accurately described by these lines by the great Russian artist Nicholas Roerich.

“In Torzhok, which is so famous for its sewing that it is even mentioned in school textbooks, not long ago a school was established here to keep alive the fading needlework tradition and advance it by returning to the older long-standing sewing techniques. Things went smoothly. One would think that the situation could simply not be any better: an experienced headmaster was found, and the school set a very specific goal that matched the local needs; and do you think that the new Zemstvo Government continued to support this wonderful initiative? Not at all. On the contrary, it decided that the school was superfluous and shortly abolished it, leaving the original and unique local crafts by the wayside and dying”, indignantly wrote Nicholas Roerich at the time.

It seemed that in the midst of revolution, civil war, famine, and devastation, no one would ever remember the embroidery traditions. But gold-sewing workshops were opened again in Torzhok in 1923 and schools educating new craftswomen were created on their foundation. Even those who have never been to Torzhok, and know nothing about gold embroidery, have likely seen this folk craft in”Anna Karenina” by Alexander Zarkhi, “War and Peace” by Sergey Bondarchuk, and many other films, the costumes for which were embroidered by the craftswomen of Torzhok.

The enterprise that is now called “The Torzhok Gold Seamstresses” continues to create unique works of art. In 2015 President of the Russian Federation Vladimir Putin presented to Pope Francis a panel with the image of the Cathedral of Christ the Savior in Moscow, handmade by the craftswomen of Torzhok. The gold thread of creativity stretched from the Kremlin to the Vatican.