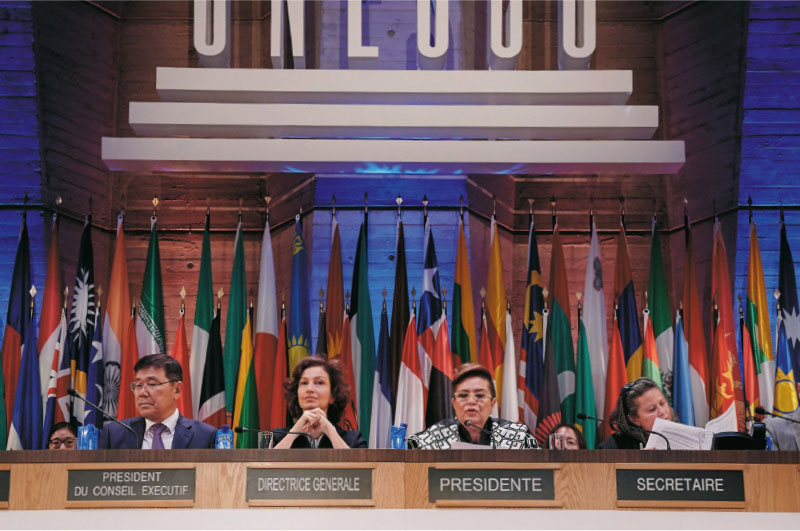 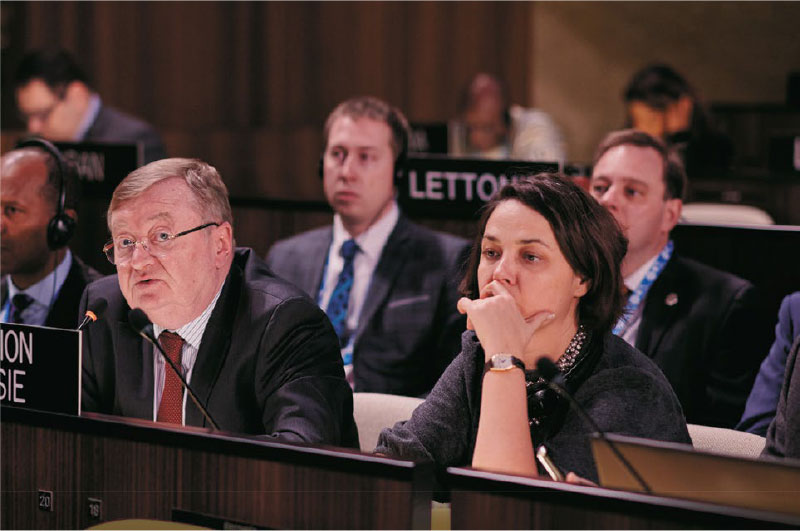 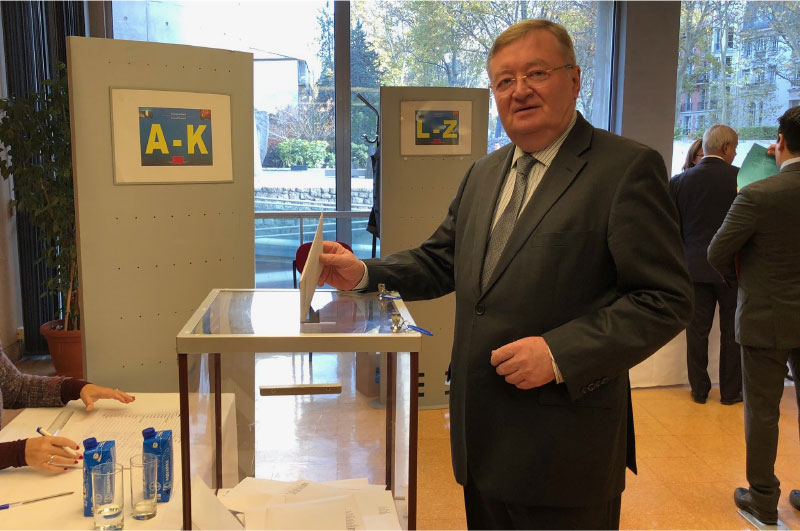 Every two years, the 7th arrondissement of Paris plunges into a motley polyphony of languages, and nearly 200 national flags can be seen flying over the Place de Fontenoy next to the UNESCO headquarters. These are the very signs that let the residents and guests of the capital know that the city hosts another General Conference.

12 On November 12, the UNESCO headquarters opened its doors for the 40th anniversary session of the General Conference. The highest governing body of the global intergovernmental forum for humanitarian cooperation brought together 15 Heads of State and Government, 100 Ministers of Education, and 122 Ministers of Culture, representing all 193 member states and 11 associate members of the Organization.

The opening ceremony featured addresses by the UN Secretary-General António Guterres and UNESCO Director-General Audrey Azoulay. Both leaders unanimously stated that uniting the efforts of all countries on the basis of solidarity and multilateralism is the only way to erase the world’s dividing lines, and these are exactly the purposes of UNESCO.

The delegation of the Russian Federation was led by the Minister of Science and Higher Education Mikhail Kotyukov. Speaking at the General Policy Debate, he called for preserving UNESCO’s atmosphere of mutual trust, respect, and consensus, and warned against the politicization of the Organization’s activities and its mission creep. These principles, along with the strict observance of international law and firm commitment to the provisions of the constituent documents of UNESCO, guided our state in discussing such complex issues as the preparation of the Organization’s new program and budget, consideration of draft amendments to UNESCO Constitution proposed by a number of countries, and discussion of specific program orientations.

Among them, education was the key issue. The adoption of the Global Convention on the Recognition of Higher Education Qualifications and the Recommendation on Open Educational Resources became one of the most significant achievements of the Conference. These regulatory instruments, prepared with the participation of Russian experts, are expected to be strategic in nature and break new ground in terms of academic mobility, distance learning, and building knowledge societies.

The natural and social sciences were at the core of the debate. The states agreed on the need to develop recommendations on the ethics of artificial intelligence and the Open Science project. They proclaimed 2022 as the International Year of Basic Sciences for Development and declared a number of World days, including the Day of Mathematics (March 14).

At the session on culture, the Russian delegation expressed support for enhancing the effectiveness of the 1970 Convention on the Means of Prohibiting and Preventing the Illicit Import, Export and Transfer of Ownership of Cultural Property. Besides, the 2020–2021 UNESCO list of International Days was approved. It includes the anniversaries of the world-famous Russian writers: Ivan Bunin, Fyodor Dostoevsky, and Nikolay Nekrasov.

During the consideration of communication and information matters, our country welcomed the adoption of the revised Statutes of the Intergovernmental Council for the Information for All Program and the proclamation of the annual World Media and Information Literacy Week (24–31 October).

In accordance with UNESCO’s democratic procedures, elections to its governing and subsidiary bodies were held. Thanks to the support of numerous partners and like-minded States, Russia was re-elected to the Executive Board of UNESCO, the Intergovernmental Bioethics Committee, and the governing bodies of the Man and the Biosphere Program, the International Hydrological Program, and the Management of Social Transformations Program. Our specialists will also be represented on the governing board of the UNESCO Institute for Statistics.

The election of Russia to the World Heritage Committee became a matter of particular importance for our country, as it is the governing body of one of the most famous and mass documents of UNESCO — the 1972 Convention concerning the Protection of the World Cultural and Natural Heritage.

The General Conference concluded its work on November 27. Its agenda included about one hundred various program, administrative, and budgetary issues. Despite the considerable difficulty in coordinating the positions of all participating states and the long period of time required to achieve it, the session once again proved that even after many decades since the establishment of UNESCO, its high ideals and values remain enduring and, without any exaggeration, universal. The Russian Federation is grateful to the delegations of Member States for the constructive attitude and willingness to cooperate in the search for effective and results-oriented solutions, as well as to the Secretariat of the Organization for conducting serious and qualitative work on organizing the General Conference.

Remarks by head of the Russian delegation and Minister of Science and Higher Education Mikhail Kotyukov at the General Policy Debate of the 40th session of the UNESCO General Conference, Paris, November 14, 2019.

In light of the growing international disunity and the extreme challenges facing the world, such as the threat of international terrorism to our common cultural heritage, increasing inequality, including in the field of information, and the alarming rate of youth radicalisation, we need UNESCO, more than ever, to fulfil its noble mission, that is, to construct the defences of peace in the minds of men and women.

Russia, which is deeply committed to UNESCO’s ideals, would like this humanitarian intergovernmental organisation to operate without any political bias, but strictly in keeping with its mandate and the priorities approved by the member states. While working towards peace based on “humanity’s moral and intellectual solidarity,” this respected platform should also help preserve the traditional atmosphere of trust and mutual understanding, the couture of consensus and respect for the identity and legitimate interests of nations.

Education has a huge role to play. We must enhance the level of general knowledge about the mission and mandate of the SDG-Education 2030 Steering Committee as a global mechanism for consultation and coordination. Our efforts must be directed towards strengthening preschool education, technical and vocational education, at introducing ICT and at promoting the UNITWIN/UNESCO Chairs Programme and the UNESCO Associated Schools Network. We must focus on the training of teachers, who are the main pillar of education.

We expect this General Conference to adopt the Global Convention on the Recognition of Higher Education Qualifications, which has been drafted with active support from our experts. Another important document is the Convention against Discrimination in Education. We hope that the UNESCO Secretariat will not put up with gross infringement on its provisions by the member states, primarily Ukraine and Latvia, where the educational space is being gradually cleansed of the Russian language.

We believe that all-round support should be given to the International Basic Sciences Programme (IBSP) as the basic instrument for attaining a number of sustainable development goals. We propose enhancing the status of IBSP to the level of an intergovernmental programme. It is extremely important to promote the ideals of academic endeavour, including among men and women of science. The establishment of a new UNESCO-Russia award, the international Dmitry Mendeleev prize, will serve this goal and will also be an adequate conclusion of the International Year of the Periodic Table of Chemical Elements. Madam Director-General, I would like to thank you once again for supporting this idea and for actively contributing to its elaboration.

We welcome the key role played by the Interg­overnmental Oceanographic Commission of UNESCO in the drafting of a research programme and action plan of the UN Decade of Ocean Science for Sustainable Development (2021–2030). We see great potential in such natural sciences programmes as Man and the Biosphere (MAB), the International Geoscience and Geoparks Programme (IGCP), and the International Hydrological Programme (IHP).

We hope that the General Conference will give the green light to the drafting of a global code of ethics for artificial intelligence. We are ready to share our expert potential in this sphere, which we have accumulated during the drafting of the National Strategy for the Development of Artificial Intelligence.

The rapid development of new technology provokes radical changes in the structure of society and is consequently increasing the role of social sciences. We firmly believe that the Management of Social Transformations (MOST) Programme should focus on global interdisciplinary topics to confirm UNESCO’s role as the global laboratory of ideas.

UNESCO should pay more attention to the ethics of information society, responsible behaviour of players in the media environment and digital infrastructure security, as well as efforts to enhance the quality of journalistic education and professional standards.

We reaffirm our resolve to continue working actively in the fields of sports and anti-doping in strict compliance with the International Convention against Doping in Sport.

We support the involvement of young people in UNESCO activities. We believe that this work must be transparent, inclusive and conducted in close cooperation with the UNESCO National Commissions based on a fair geographical distribution.

In the context of our traditional friendly ties with African countries, we support Priority Africa at UNESCO. As President Vladimir Putin said at the recent Russia-Africa Summit held in Sochi, “we invariably advocate the principle stipulating African solutions for African problems.”

To wind up my remarks, I would like once again to call for redoubling efforts to rebuild the monuments that have been destroyed by terrorists in Syria. Faced with this challenge, we must show the above-mentioned “moral and intellectual solidarity” based on the UNESCO ideals and principles.