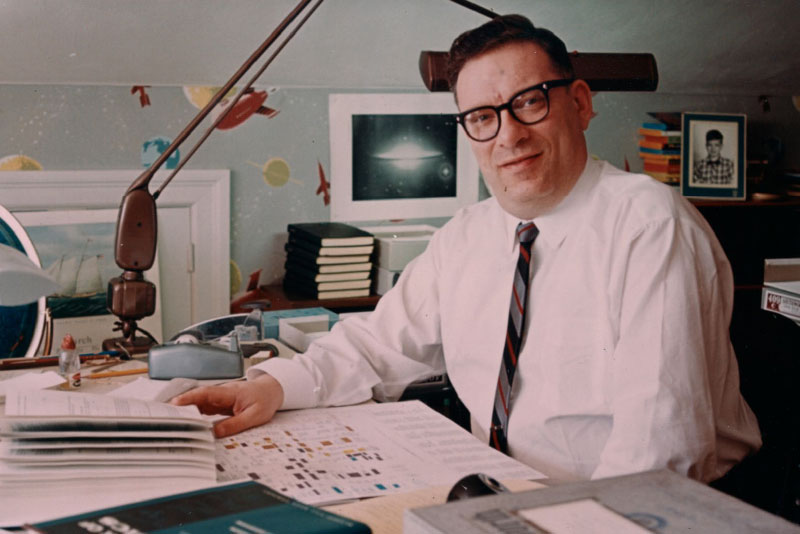 Isaac Asimov could have been a great Soviet science fiction writer, and create together with Ivan Efremov or the Strugatsky brothers, who were important representatives of the genre. But fate predestined otherwise, and the writer, who was born on January 2, 1920, in the small village of Petrovichi in Smolensk province, became a classic of American literature.

The parents of the future sci-fi writer did not oppose the Soviet regime but were very tired of the Civil War and the devastation in which their country had been for a long time, so in 1923 they emigrated to the United States, settling down in Brooklyn, where they soon opened a pastry shop. Isaac’s mother decided to send her son to school at the age of five in order to do so she corrected the year of his birth in the documents.

Young Isaac stood out among his classmates because he easily “grasped” things unlike his peers who needed repeated explanations. Later in life, the writer often described himself as a child prodigy, who very quickly learned English (before he spoke only Yiddish), and learned to read on his own.

In his free time, Isaac helped his father in the shop, always trying to find time for reading. Encouraging their son’s love for literature, Isaac’s parents signed him up for the library, where he read everything from the classics to Greek mythology and historical research. The Asimov shop also sold tabloid magazines, among many stories these magazines featured fiction, which Isaac eagerly read in secret from his parents.

By the age of 11, the boy had developed a passion for writing and started to send his stories to science fiction magazines. Of course, the first works of the young writer were not published, but eventually one of his stories was given third place in a readers’ vote.

After graduating from school, Isaac Asimov began to study at the chemistry department of Columbia University, where he received his master’s degree in 1941. That same year, he published a story “Nightfall”, that talks about a planet, on which night comes once every 2049 years. The book became incredibly popular, it was included in more than twenty anthologies and repeatedly adapted for the big screen. Isaac Asimov considered this story a “watershed” moment in his career, that turned him from a little-known publicist to a famous writer. He wrote a story “Liar!”, about a robot that could read minds, at the same time. This book laid the foundations for the famous “Three Laws of Robotics” book, that showed robots not as artificially created beings, dreaming of destroying humanity, but as helpers of people and sometimes even ethically superior to them.

The next few years, Isaac Asimov worked as a chemist at an army shipyard, then he served in the army. In 1946, he returned to school, defended his dissertation in biochemistry, and taught at Boston University for nearly a decade and a half, without stopping writing. By now he was already recognized as one of the founders of science fiction and was considered one of the “Big Three” along with the great American science fiction writers Robert Heinlein and Arthur Clark.

In 1958, Asimov quit the university and devoted himself entirely to writing. His works covered a multitude of fields, including algebra, chemistry, anatomy, astronomy, biochemistry, religious studies, literary criticism, and history. During this period Isaac Asimov created extraordinary books about robots and the Galactic Empire, wrote a lot of essays, put together anthologies of his stories, made non-fiction books for children and adolescents, among which were ABC’s of the Earth, ABC’s of the Ocean, and many others.

Over his career, Asimov wrote almost 500 books and thousands of articles covering a huge number of aspects of human knowledge, he was a fierce critic of pseudoscience and false doctrine. He was also considered the best science popularizer in the world and was welcomed to universities all over the World, where he gave popular lectures, as well as to conferences and publishing houses.

Asimov’s creative work has been recognized with many awards, including the Grandmaster of Fiction Award, one of the most prestigious in its field. Isaac Asimov became the eighth Great Grandmaster, at the moment there are only 34 writers holding this title.

Asimov introduced many new terms that are widely used today, some of them are “robotics”, “positron”, and “psychohistory”. Some of the predictions he made about the future were published in the New York Times in 1965, and years later many of those predictions have turned out to be true. The writer imagined the possibility of video communication, wall-mounted TVs, coffee machines, and worldwide telephone communication almost half a century before they were invented.

By the end of the 70s, Isaac Asimov’s health seriously deteriorated. After recovering from complicated heart surgery, he continued an active and eventful life: he was writing, lecturing, giving interviews, and participating in different social events. In the last six years up to his death, the writer published 90 books, of which two became bestsellers. Isaac Asimov passed away on April 6, 1992, surrounded by his close friends and relatives.