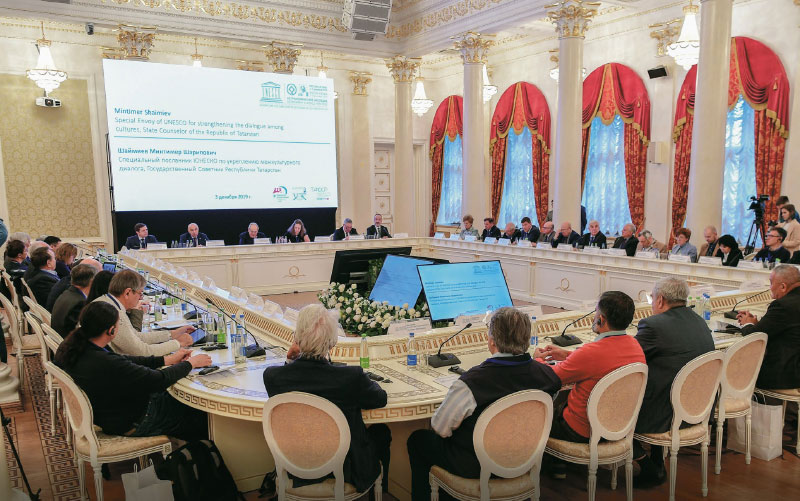 From December 2nd to 7th, 2019 Kazan, the capital of the Republic of Tatarstan, attracted famous astrophysicists, astronomers, mathematicians, representatives of federal authorities, specialists from the academic environment as well as experts on historical and cultural monuments preservation from more than 18 countries.

The grand opening of the International Forum “Astronomy and World Heritage”, dedicated to the preservation of astronomical and space heritage, took place on December 3rd in Kazan. The forum was held under the auspices of the Commission of the Russian Federation for UNESCO.

The event was opened by the State Advisor to the Republic of Tatarstan, UNESCO Special Envoy for Intercultural Dialogue Mintimer Shaimiev, who noted that the astronomical heritage is the greatest achievement of human civilization and world culture. He told the forum participants about the history of the Kazan Astronomical School, and the Kazan Observatory named after Vasily Engelhardt as well as the achievements of astronomers of Kazan University.

The plenary session was addressed by the President of the World Heritage and Astronomy Commission of the International Astronomical Union, professor of Hamburg University and the Hamburg Observatory Babette Emma Gudrun Wolfschmidt, academician of the Russian Academy of Sciences Mikhail Marov, corresponding member of the Russian Academy of Sciences, scientific adviser of the Pulkovo Observatory Alexander Stepanov, the president of the Kazan Federal University Ilshat Gafurov, the head of the Office of the Ministry of Culture of the Russian Federation for the Volga Federal Gleb Petukhov, who expressed the greeting of the Minister of Culture of the Russian Federation Vladimir Medinsky, and other guests. During the forum, the participants discussed the appearance and development of astronomical observatories in Russia and the world as well as their role as scientific, educational and cultural centers.

The second working day of the forum was devoted to the discussion of the preparation of the nominations for Russian scientific centers that include two observatories of the Kazan University — Kazan City Observatory (1837) and the Astronomical Observatory named after Vasily Engelhardt (1901).

The Executive Secretary of the Commission of the Russian Federation for UNESCO, Ambassador-at-Large of the Russian Ministry of Foreign Affairs Grigory Ordzhonikidze gave a speech about the prospects of developing Russian nominations related to astronomical heritage as well as the significant potential of transboundary and serial nominations of the astronomical heritage to be included in the corresponding UNESCO List. Presentations were made by the Deputy Director-General for International Cooperation of the Russian Federal Space Agency “Roscosmos” Sergey Saveliev, the Director of the Astronomical Observatory named after Vasily Engelhardt Yury Nefediev, academician of the Russian Academy of Sciences Mikhail Marov and other experts.

The multifaceted nature of astronomical science as well as its interdisciplinary and universal nature requires the cooperation of scientists and experts at the international level. The forum was a continuation of the systematic work of Russian and foreign scientists in the field of preservation of astronomical and space heritage. At the end of the forum, its participants unanimously adopted the final document based on the Kazan Declaration on Astronomical Heritage of 2009.

Within the framework of the forum, issues of preserving cultural and historical monuments have become key topics at the international youth models of the UN and UNESCO, organized at the Kazan Federal University.