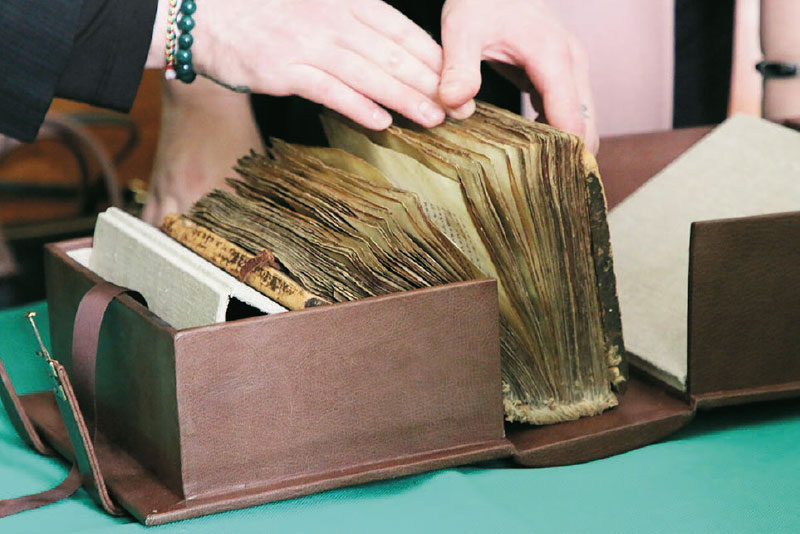 We continue to talk about the documents included in the register of the UNESCO «Memory of the World» programme aimed at preserving the documentary heritage of the world. Today we are going to talk about the Arkhangelsk Gospel of 1092, the fourth oldest Slavic manuscript with an specific date of writing. It was added to the international registry in 1997.

The Preservation of documentary heritage program of UNESCO was established in 1992. Its goals are the preservation of documentary heritage, as well as the provision of free access for citizens to it, the popularization of knowledge about interesting historical documents, and the identification of new heritage sites to be preserved. Today, “Memory of the World” operates in all parts of the world.

There is also a documentary heritage of Russia included in the international registry. One of the most interesting documents of Russian as well as East Slavic history and culture is the Arkhangelsk Gospel written in 1092.

The unique Arkhangelsk Gospel is compiled in accordance with weekly church readings. It begins with Easter week. In modern church practice, they are no longer used. A handwritten Slavic book is kept in Moscow at the Russian State Library.

178 sheets of coarse parchment from poorly processed calfskin are of great interest to historians of Russia and other Slavic countries. Speaking of the Arkhangelsk Gospel, many things are done for the first time. Indeed, this is the first written document of medieval Russia, wherein illuminated letters first appeared. And this is the first book of the 11th century that has reached us with the names of the authors, the scribes. The Arkhangelsk Gospel is written by presbyter Peter and his assistants named Michka and Akim. Scientists are still studying the handwriting features of each of the scribes. After all, there were only a few literate people back then, and therefore each written sample is of particular interest.

All sheets are very different: some have uneven margins, others have unstitched holes, and others have parts hemmed later. Parchment turned out to be a very durable material; although never restored it is still available for study by specialists. The gospel written in ink and cinnabar contains 177 initials. Basically, these are the letters V and R. Each is 5–6 lines in height with ornaments, written in cinnabar. Each initial is a real miniature, consisting of flowers, plants and geometric shapes. The Gospel was an ordinary book for everyday reading.

The original binding of the gospel has not been preserved. Only two boards without a shell survived, which are attached to the block of parchment sheets with straps. On the boards there are traces of their initial attachment to the block and traces of nails. Traces of four fasteners have also been preserved — two on the vertical and one on the horizontal sides of the boards.

Written in 1092, the Arkhangelsk Gospel was discovered in December 1876. The story of this find is a real detective story. One of the main names in it is Sergey Bolshakov — a Moscow merchant of the 2nd guild, he came from a family of Old Believers of Orthodox Church who were engaged in the search and sale of Russian antiquities, primarily manuscripts. Having inherited professional skills and intuition, Sergei Bolshakov at 21 was the official commissioner of then famous Rumyantsev Museum — a collection of manuscripts, coins, books and other items of Russian antiquity. The Museum had been started by Count Nikolai Rumyantsev, a prominent statesman of Russia in the first half of the 19th century. In December of 1876, a certain peasant who came from Arkhangelsk, showed to Sergey Bolshakov an old parchment manuscript. The peasant himself clearly did not understand the value of the artifact that he possessed. But Sergey Bolshakov immediately understood it.

How much the merchant paid to the peasant for the Gospel is unknown. Since than it has been called the Arkhangelsk Gospel. Having carefully studied the acquisition, showing it to other bibliophiles, Sergei Bolshakov offered the find to the Rumyantsev Museum. At the same time, the abbot of the Danilov Monastery in Moscow, archimandrite and scholar Amphilochius found out about the Gospel. That very time he was working on the compilation of “Old-Slavic-Greek-Russian Dictionary” and was very interested in the find. It took him only 11 days to study the parchment sheets in order to establish their true age, and even to draw up a “Description of the Gospel of 1092 (having compared it with the Ostromir Gospel).” As a result, Sergey Bolshakov, having secured the authoritative support of Archimandrite Amphilochius, managed to sell the manuscript to the Rumyantsev Museum for 700 rubles. For comparison: a cost of a regular book then was 3 rubles.

The Arkhangelsk Gospel aroused great interest all throughout Russia and other European countries: articles about it appeared in serious scientific publications of Leipzig, Göttingen, Brno, and Prague. The East Slavic manuscript from the moment of acquisition was kept in the Rumyantsev Museum, the successor of which was the Russian State Library.