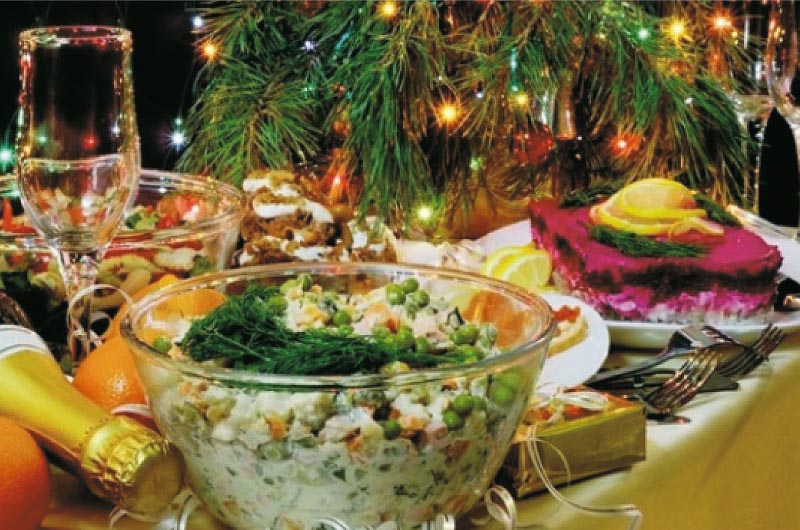 Peter the Great first introduced Russia to the tradition of celebrating the New Year on the night of December 31. However, New Year’s festivities became particularly popular in Soviet times. That’s when traditional New Year’s foods began appearing on the dinner table, adding to the special festive atmosphere.

In Russia, New Year is a family holiday when all relatives try to gather at the same table on New Year’s Eve. Maybe that’s why most Russians still cook the dishes of their parents and grandparents for the occasion. Usually the dishes are simple, hearty and “long-lasting” enough to feed a large crowd. Any leftovers can be finished later, because New Year’s holidays in Russia is a long ten days event!

There is no New Year celebration in Russia without Olivier salad. It was named after Lucien Olivier, who used to run the famous Hermitage restaurant in Moscow in the middle of the 19th century. At that time Olivier salad was made for wealthy gourmets: different versions of the recipe came with hazel grouses, lobsters, crayfish tails or truffles, with the Provencal sauce. The recipe has happily survived to this day, however, changed almost beyond recognition. For example, if earlier boiled eggs were used only for decoration, now they are one of the main ingredients, along with boiled potatoes and carrots, pickles and canned peas. As to meat ingredient, it comes with crab meat or sausage. In Soviet times, Olivier salad was usually cooked with sausage. Olivier salad in a sense is a symbol not only of the New Year, but also of Russian cuisine in general. It is no wonder that in Europe it is called the Russian salad.

Another legendary attribute of New Year’s cuisine is the Dressed Herring salad known as the Herring Under a Fur Coat. Its recipe is credited to the Moscow innkeeper Anastas Bogomilov. It was during the turbulent 1919, when visitors to the inn often argued about politics and smashed furniture and dishes in the heat of disputes. So, Bogomilov came up with a recipe of a layered salad with a meaning: herring meant the proletariat, onions, potatoes and carrots — the peasants, boiled beets — the Red Army, and mayonnaise — the bourgeoisie. All of them perfectly complement each other! Well, SHUBA (fur coat) is nothing more than an abbreviation of the “Boycott and anathema to chauvinism and decline!” motto. Having eaten an inexpensive and hearty salad, the visitors of the inn did not get drunk too quickly. A successful recipe is still used, especially since the “Herring under a fur coat” leftovers taste just as good the morning after the party. The main task is not to forget to put it in refrigerator.

As a snack, jellied meat, aspic or Kholodets is often eaten at the New Year’s night in Russia. It is an old dish. For example, in the 16th century Domostroy book we read: “Kholodets is always delightful, whenever you cook it.” True, this delight takes a lot of time to cook. Pork feet, chicken or turkey wings are boiled in water until the meat begins to separate from the bones. The broth is filtered, gelatin and seasonings are added, the meat is cut into pieces. Everything is mixed and poured into molds and then put into refrigerator. For decor, you can add figured slices of boiled carrots and herbs to the broth before cooling.

The classic snacks of Soviet New Year table are sandwiches with red caviar or sprats (canned hot smoked Baltic sprat). The caviar is simply spread on a baguette with butter, but the story with sprats is more complicated. Rye bread is fried in oil, rubbed with garlic, covered with boiled egg, cut in small pieces and mixed with mayonnaise, and then comes a couple of spicy sprats. Lemon slice or parsley sprig are optional.

Hot dishes: a feast for everyone 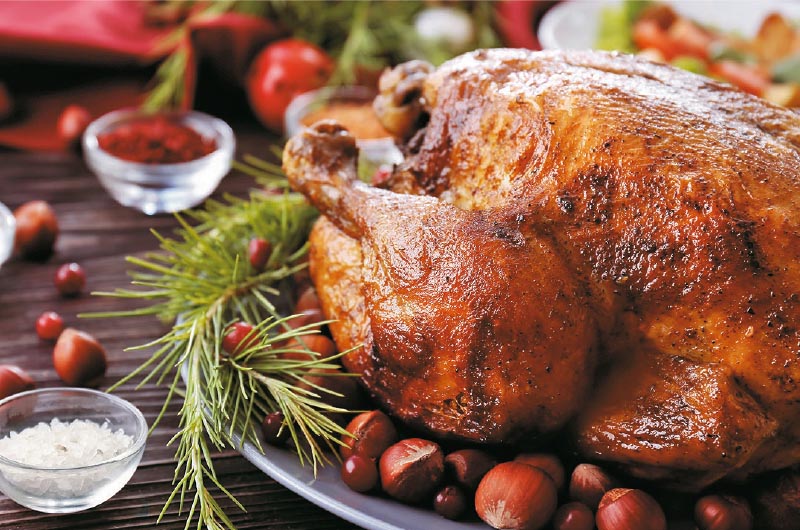 Meat dishes were a must during the winter holidays in Russia. For example, in the late 18th — early 19th centuries, after the end of the Christmas fast, Russians ate pork stuffed with porridge, fried geese, hazel grouses on a spit, and baked mutton. In the Soviet era, the menu was greatly simplified. So, it was a whole chicken instead baked in oven and served on the festive winter table. In order to get a golden crispy crust, the chicken was rubbed with garlic and mayonnaise before baking. The French meat recipe was just as popular. It is funny but in the world the name for this dish is Orlov-style Meat (Veau Orl off in French), because it’s recipe was invented in the 19th century by the Frenchman Urbain Dubois, the chef of Count Alexei Orlov. True, in the count’s version, the meat was baked under bechamel sauce mixed with cheese, but Soviet housewives had to use simple mayonnaise instead of the exquisite sauce. The most important part is to have the sliced meat simmer in the oven until becomes soft. The mixture of mayonnaise and cheese gives a beautiful crust — ideal for a festive dish.

Desserts: the sweet taste of a dream

On New Year’s Eve, they spared no effort on complicated recipes. In order to please the guests, they prepared the Napoleon cake. It is a layered pastry with custard in between layers. Or the Nuts cookies, which required a special cast-iron mold. However the most iconic New Year’s treat is, of course, the tangerine. Small citruses were imported to Russia long before the revolution. In wealthy families they were hung on Christmas trees along with walnuts wrapped in foil. Since 1963, tangerines were imported to the USSR by dry cargo ships from Morocco in time for the New Year season. Since then, many generations of Russians associate the New Year with the aroma and taste of sweet and sour tangerine.

Drinks: happiness in a glass

It seems that Champagne was especially created for a magical New Year’s atmosphere. The very sight of bubbles flying up from the bottom of the glass creates the right mood. In the USSR, the tradition of celebrating the New Year with a bottle of Soviet Champagne came in the mid-1950s. The Soviet leadership sought to ensure that every worker and engineer could afford a bottle of sparkling wine. For that there was an innovative nonstop way of making champagne introduced at the factories in 1954. This method reduced the cost of each bottle by 20%. Russians prefer medium sweet champagne to medium dry one and brut. Champagne has become a symbol of the New Year, thanks to television: the Carnival Night movie (1956) and the Blue Light show (1962–1985). On New Year’s night every Russian family raises their glasses with champagne to the chimes of the Moscow Kremlin clock and make a wish. People joke that if you manage to finish the glass before the last 12th beat, it will certainly come true.